After a mass in Macabalan, the fluvial procession last August 28 proceeded up the Cagayan de Oro River and circled back around the Ysalinas Bridge and concluded on the banks at the back of the City Hall premises. Show in photo are some of the gaily decorated bancas getting ready to position themselves for docking near a stage behind City Hall.

The Street Dancing group from Barangay Kauswagan showed up during the flagraising ceremony at City Hall, August 29, to perform their winning street dance that made them champions (and P200,000.00 richer) during the Street Dancing Competition held last August 26, 2012. Barangay Bayabas and Bugo came in 2nd and 3rd, earning them P150,000.00 & P100,000.00 respectively. 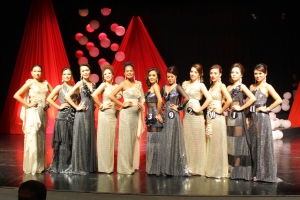 The 11 lovely candidates of the Search for Miss Kagay-an 2012 show their best pose during the Casual & Long Gown Competition held August 22, 2012 @ the Rodelsa Hall.

City Mayor Vicente “Dongkoy” Y. Emano took a fancy to a bonsai plant on display at the City Hall grounds during the kick off ceremony of the Agro-Industrial Fair, August 15, 2012. Several booths put up by the barangays as well as by private entities displayed agricultural products ranging from vegetables, fruits, plants, seedlings, to dairy produce. Landscaping work were also on display featuring ornamental plants, grass and other decorative paraphernalia.

City Mayor Vicente “Dongkoy” Y. Emano receives some tokens from Cagayan de Oro Hotels and Restaurants Association (COHARA) President Ms. Joanna Yu during the Kumbira 2012 opening at the Atrium in the LKK Center, August 15, where he delivered a short message in appreciation of this event which, among other things, fosters friendly competition between culinary enthusiasts from all over Mindanao.

CdeO City Administrator Atty. Leon Du M. Gan poses with one of the “Art Tsada” artist with a piece featuring a silhouette of a tree with people clinging on its branches reminiscent of the experiences of a lot of survivors during the Sendong flood last year. The exhibit is open to the public with the participating artists doing ‘on-the-spot’ painting demonstrations and workshops during the fiesta celebrations specially dedicated to Sendong survivor children to help them recover from the psychological trauma brought about by the disaster.